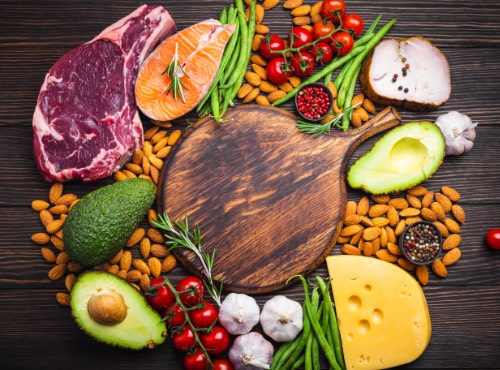 The ketogenic diet is a nutritional model that some consider controversial. That’s a result of the fact that the macro-nutrient composition in a keto diet is hugely different from the one considered the standard in regular dietary recommendations.

That does not mean that the ketogenic diet is not worth recommending – quite the opposite. For over a century, this diet has been using in the treatment of drug-resistant epilepsy. Currently, it is being discussed as a useful tool to help treat diabetes, heart diseases, and even cancer. The high weight loss potential of the keto diet has also been noticed.

What is the ketogenic diet?

The ketogenic diet is a nutritional model that aims to bring the body into a state of nutritional ketosis. This exceptional metabolic state is distinguished by elevated levels of blood ketones – beta-hydroxybutyrate, acetoacetate, and acetone.  It is made possible by limiting the consumption of carbohydrates, the basic source of energy for cells. Lack of carbohydrates in the diet, and therefore a lack of glucose, means that the body is looking for other sources of energy – meaning fats. We are talking both about fats supplied with the diet and stored in the form of adipose tissue.

The ketogenic diet became famous in the 1920s when it was successfully used to treat all-drug-resistant epilepsy. Until the invention of synthetic insulin, it was also the method of choice for the treatment of diabetes. Currently, there are more and more clinical trials every year, showing the comprehensive therapeutic potential of the ketogenic diet.

Traditional diets provide around 55-60% carbohydrate, which means that the average daily carbohydrate intake is around 200-300g. In a ketogenic diet, carbohydrate intake is limited to just 20-50g per day. Protein consumption is moderate due to the fact that certain amino acids can be used in the process of glucose synthesis – and this would prevent you from entering a ketosis state. The basic macronutrient of the diet is fat and it is the fat – together with ketone bodies synthesized with it – that is the source of energy.

Why is it so important to limit the carbohydrates intake in the keto diet? In order for the body to start synthesizing ketone bodies, it is necessary to deprive it of glucose stores – and we mean both the glucose supplied with the diet and glucose stored in the body in the form of glycogen. The systemic reserves of glycogen are depleted after about 48 hours – but only when the intake of glucose is reduced to a minimum.

How to start the keto diet, what is keto-adaptation

Keto adaptation is the first period of the ketogenic diet during which the body changes its metabolism. In the first two days, the body’s glycogen stores are depleted, then energy is obtained from fats. The oxidation of fats in the liver is accompanied by the synthesis of the body’s ketones, and the state of nutritional ketosis is achieved after about 14 days. To achieve and maintain ketosis throughout the keto diet, you must not exceed the recommended carbohydrate intake. Otherwise, the body will use glucose as an energy source, immediately inhibiting the synthesis of ketone bodies – and then the entire keto-adaptation process will have to be restarted.

The period of keto-adaptation is mentioned as the most challenging stage of the diet, as it is accompanied by numerous ailments. The most common symptoms include:

In order to survive the keto-adaptation period, you need to stay hydrated. A broth is perfect for this purpose, as it provides the necessary electrolytes, which are lost in excess with urine. It is also necessary to strictly follow the menu, get plenty of rest, and… have patience.

What can you eat during a ketogenic diet?

Composing a menu on a keto diet is different from a traditional menu. Products allowed on a ketogenic diet include:

Products not recommended on a ketogenic diet are:

For many years, ketone bodies were considered harmful compounds, because the levels of them in blood increased, for example, in the course of fever or starvation. In fact, these compounds are formed in the process of adaptation of the body to specific metabolic conditions and are not harmful at all. What’s more – they are an excellent source of energy for the brain, which is the most important organ in the human body. Moreover, it is the specific properties of ketone bodies that are responsible for the possible therapeutic potential of the keto diet in the treatment of e.g. cancer.

Nutritional ketosis is wrongly confused with ketoacidosis, the pathological condition associated with diabetes. With ketoacidosis, insulin deficiency leads to a significant increase in blood glucose levels. However, this glucose cannot be used by the body because of a lack of insulin responsible for transporting glucose to the cells. Then, a high level of glucose is accompanied by an increased synthesis of ketone bodies, which is a life-threatening condition, affecting, among other things, lowering of the blood pH factor. Nutritional ketosis, on the other hand, is characterized by a moderate increase in the level of ketone bodies and the maintenance of normal blood glucose levels – which has a positive effect on the body.

Supplementation on a ketogenic diet

A ketogenic diet significantly reduces the consumption of carbohydrate sources such as whole grains, fruits, and many vegetables. This may pose a risk of developing nutritional deficiencies. Such a radical change in eating habits, especially in the initial period, may be associated with a deterioration in well-being. The introduction of appropriate supplementation can help reduce the bothersome symptoms accompanying the period of entering the state of ketosis. This is not the only benefit of using dietary supplements. Dietary supplements during a ketogenic diet help to reduce the risk of nutritional deficiencies, especially folic acid and magnesium. Properly selected products also support digestive processes and ensure the proper functioning of the digestive system.

Entering the state of ketosis is the first stage of the ketogenic diet, which is aimed at reducing the glucose stores in the body and activating the processes of obtaining energy from fats and ketone bodies. This state lasts from a dozen to about 30 days and requires strict compliance with the regimen. It is crucial to maintain the right proportions of macronutrients in the diet: fats should be 80-85% of your diet, protein – up to 15%, and carbohydrates – up to 5%. In practice, this means that the daily intake of carbohydrates should not exceed 15 – 30 g per day.

In order to facilitate the body’s entry into a state of ketosis, you can reach for dietary supplements with ketogenic potential. Ingredients such as MCT oil, which is a source of medium-chain fatty acids. Medium-chain fatty acids go directly to the liver, where they are used as an energy source to form ketone bodies. In addition, MCT fatty acids are an excellent source of energy, which will be especially appreciated by physically active people.

A significant reduction in the supply of carbohydrates is associated with, inter alia, increased water and electrolytes in the body.  And it is the decrease in the level of electrolytes that is responsible for the occurrence of symptoms accompanying ketoadaptation, such as headaches and dizziness, fatigue, muscle weakness or increased thirst. In order to prevent these undesirable side effects, it is worth taking care of proper hydration of the body and supplementation of electrolytes. In the first stage of the ketogenic diet, a decrease in blood glucose and insulin levels is observed. It is accompanied by a temporary increase in the excretion of water through the kidneys, and sodium and potassium ions are removed along with the water, which poses a risk of a deficiency of these elements. Sodium can be successfully supplied by increasing the salt intake, while potassium should be taken in dietary supplements.

When following a ketogenic diet, there is a risk of nutritional deficiencies. Due to the reduced supply of fruit, some vegetables, and grain products, the ketogenic diet may not provide optimal amounts of nutrients such as magnesium and calcium, or folic acid. The richest sources of magnesium in a normal diet are foods rich in carbohydrates, such as legumes, nuts, grains and vegetables. There is little consumption of these foods when on a ketogenic diet, which may contribute to a magnesium deficiency. It is worth emphasizing, however, that this does not happen only with the keto diet – many people using a traditional diet are also affected by a magnesium deficiency. Supplementing with magnesium helps to ensure the proper functioning of the nervous, cardiovascular and muscular systems.

During the keto diet, you can use vitamin supplements containing B vitamins. B complex products provide a number of B vitamins, which are necessary for the proper functioning of the entire body. It is true that many of these vitamins are available in foods which are still widely consumed when on the keto diet, such as meat and fish. However, these vitamins are also supplied with grain products, so there may still exist a risk of developing a deficiency. Moreover, one should not forget about vitamin D3 supplementation – and not because the ketogenic diet significantly contributes to the risk of deficiency of this compound. The need to supplement this vitamin is due to the fact that its deficiencies are common and are a consequence of its insufficient skin synthesis under the influence of sun exposure. Therefore, everyone – regardless of the diet used – should supplement vitamin D in the autumn and winter period.

Benefits of a ketogenic diet

The controversy surrounding the use of the ketogenic diet stems not only from fear of ketone bodies but also from the high fat consumption. After all, it is fats that are associated with unhealthy dietary components, supposedly responsible for the scourge of obesity and heart diseases. But in fact, the link between fat consumption and an increased risk of heart disease has been debunked – only unhealthy trans fats should be excluded from your diet. There is also no clear link between fats included in your diet and obesity.

Clinical trials have proven the legitimacy of using a ketogenic diet to support the body in the following diseases:

Contraindications and side effects of the ketogenic diet

As with any diet, the ketogenic diet cannot be used by everyone. Contraindications to the use of a ketogenic diet are the period of development and growth in children, pregnancy and lactation, uncontrolled diabetes mellitus with episodes of hypoglycemia, pancreatic or hepatic insufficiency, and disorders of fat metabolism.

Possible side effects of using a ketogenic diet – apart from the symptoms accompanying the period of keto-adaptation – are persistent constipation, abdominal pain, loss of appetite, or urolithiasis.